Pollux as drawn by Michael Blank

Teacher at the School for Good

Pollux is the Princess Etiquette teacher and Welcoming Leader in The School for Good . He is one half of a twin-headed dog with his brother, Castor.

In comparison to Castor, Pollux is described as: "The other head was cuddly and cute, with a weak jaw, scanty fur, and sing-song voice." He is illustrated with white fur and blue eyes. When he is not sharing his body with Castor, he is seen with the bodies of smaller animals like goats.

Pollux is described as weak-willed and cowardly, and this is shown, for example, in how Castor takes their shared body for himself, meaning Pollux has to use makeshift bodies, such as deer. It's also shown how Pollux remained in the faculty of The School for Girls and The School for Evil, despite being neither, by sucking up to the respective leaders to keep himself safe. Also, originally students were unsure whether he was male or female. However if being started at his head on other dead animals Pollux gets sensitive and will lash out on others, he can look like Castor if angered too much.

At the School for Good, Pollux teaches Princess Etiquette, an all girls class that teaches the Evergirls manners and how to behave in their fairy tales. He also teaches dancing to the Evers when the Snow Ball is near.

A world without princes

Pollux was possibly the only male that was not evicted by Evelyn. It is unknown why Pollux didn't choose to stay at the school for boys, Pollux was very loyal to the Dean doing even the littlest things to please her, such as exterminating a pink piece on a carpet. Pollux tried to take over Anemone's class after she had a pink barrette on her hair, but was insulted.

The Last Ever After

Pollux was the only teacher from good that was loyal to Rafal, being a coward to be a teacher and not be frozen. Pollux took his job seriously and didn't show any respect towards Sophie after she took over his position. 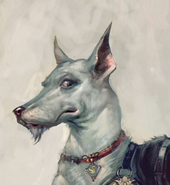 Add a photo to this gallery
Retrieved from "https://the-school-for-good-and-evil.fandom.com/wiki/Pollux?oldid=22193"
Community content is available under CC-BY-SA unless otherwise noted.